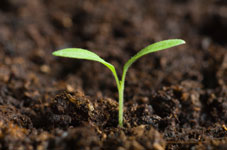 There are a variety of different fermented foods available for our dairy diet. Most of them are said to have been accidentally produced or discovered in history. Yogurt was, for example, unintentionally produced by fermenting milk in goat skin bags carried by Balkan tribes thousands of years ago. Cheese, wine, leaven bread likewise went through accidental discoveries to become known.

What can we do if the field condition is the former?
It is the key to the solution to change the diversity of microorganisms so as to make effective microorganisms dominant. This is where EM™ can its abilities into full play.
More than one hundred to one thousand of microorganisms live in one gram of soil and, as a matter of fact, it’s impossible for EM™ to be superior in number. What actually happens with application of EM™ is that EM™ stimulate native microorganisms, most of which are opportunistic, and make them work in cooperation with EM™ in a good way for environment.

EM technology™ is based on the idea of coexistence with native and originally-dominant microorganisms, not exclusion of them.